(February 10, 2022/Munich) The Quantum Application & Research Lab (QAR-Lab) at LMU’s Institute of Computer Science continues to bring Quantum Computing into application and has presented new findings. In November 2021, the second challenge “Quantum Computing Optimization” had started, and on February 10, 2022, 24 students of computer science presented the results to industrial partners. Head of QAR Lab Prof. Dr. Claudia Linnhoff-Popien was pleased with the findings from the LMU project, which lasted several months and partnered with Bayer, E.on and Evonik Industries. The students had executed one use case of each company on three quantum computers and one quantum-inspired computer. 43 people participated in the virtual presentation, some of the results are still confidential.

Prof. Dr. Claudia Linnhoff-Popien, head of QAR-Lab at LMU thanked the students for their work and the business partners for their intensive participation. The QAR-Lab, founded in 2016, pursues the goal of making quantum computing accessible to a broad user group in research and industry. A great deal of progress is being made toward this goal.

For the “Optimization Challenge,” the companies BAYER, E.on and Evonik Industries had provided practical application cases. The computer science students were asked to run the various optimization scenarios on the quantum computers of D-Wave, Fujitsu, IBM and Rigetti. The goal was to program the use cases on these computers in order to find out by comparison which hardware provides the most optimal result for the respective problem.

The use case of the energy company E.ON involved the optimization of personnel planning in the call center. Evonik Industries’ problem was a “general purpose optimizer” and the use case of the chemistry and pharmaceutical company BAYER dealt with optimizing a supply chain in agriculture.

QAR-Lab scientist Jonas Stein had organized the event and started by explaining the quantum mechanical model and the currently existing quantum hardware. The bottom line, he said, is: How do you get to the ground state of a physical system, because that encodes the solution to the optimization problem. 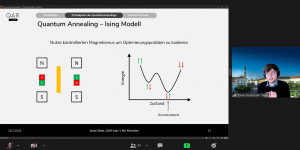 In the main part of the evening, the three student teams each presented their results:

– In the use case of the energy company E.on, a pure combinatorial optimization was performed. The task was the optimization of personnel planning in the call center. Here, the test runs yielded good results, and the industrial problem was overall well suited for quantum approaches. A program with a graphical user interface was developed to enable the low-threshold use of quantum computing in practice. 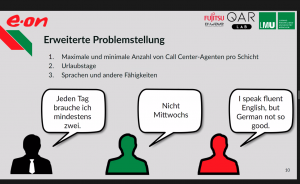 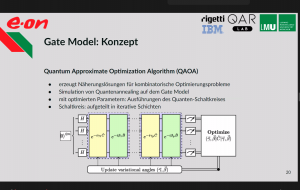 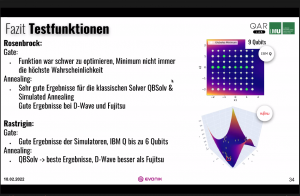 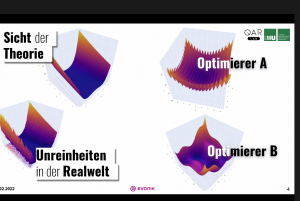 – The use of the BAYER group considered the optimization of agricultural seeds production. The use case was more complex in calculation than the other two use cases and presented the students with some hurdles.

Compared to the first challenge in Summer 2021, larger problems were now solvable thanks to new hardware. However, accessing the hardware has continued to be difficult or error-prone on the software side. The Annealing model continued to deliver better results than the Gate model, with the coding at Fujitsu working better in some cases and at D-Wave’s computer in others. The result is a proof-of-concept hardware implementation for combinatorial and continuous optimization problems with the new insights for optimized problem formulation.

At the end of the evening the industry representatives thanked the organizers and students for their weeks of effort in the „Quantum Computing Optimization Challenge“. A lot of time and money obviously had gone into these ‚learnings‘, and the university’s commitment was greatly appreciated.

Dr. Ulf Hengstmann, Digital Transformation Lead R&D at BAYER was positive about the first results. He said they were aware that the systems were still prone to errors “in these early days of technology development. Nevertheless, they are already providing important initial findings. It is an exciting development, he said.

Computer science student Jonas Blenninger was enthusiastic about the three-month programming work: “I found the programming of the quantum computers for a real industrial use case challenging and very motivating. The internship was incredibly fun and I learned an extreme amount during these months.”

Computer science student Lennart Rietdorf was also excited about the hands-on application offered by the computer science department:  “The quantum computing internship was very instructive and interesting. Because of the group work, the team members can complement each other’s strengths. I also appreciated the almost always available, very motivated scientist team of the QAR Lab, as well as the extremely quick grade announcement directly after the final lecture.”

Chair PhD scientist Jonas Stein, supervisor of the challenge, concluded: “For the use cases from the areas of production, service and product development, the students were able to successfully develop innovative quantum computing solution approaches and test them on real quantum hardware. In particular, they were able to demonstrate a proof of concept for solving continuous (rather than the usual combinatorial) optimization problems using quantum computing. It was a lot of fun for me as well.”

The Challenge serves to promote science-to-practice transfer. The results will be processed in scientific publications in 2022.